There's plenty written about how to build the Bearhawk, but very little about how to rig it well. Rigging it correctly will give a well balanced aircraft that is a delight to fly. These notes are a starting point to rig the aircraft prior to test flying. We then made many adjustments during the initial flying, with the assistance of forum and fellow Bearhawk builder Kevin Deutscher.

It is assumed that cables will be correctly tensioned to manufacturers recommended tension where applicable or those provided by the AC43.13.

To set the angle of incidence bolts as recommended by the plans.

To set the horizontal stabilizers laterally to ensure they are level in relation to the main wings.

To set the horizontal stabilizers longitudinally to ensure they are both aligned without any twist.

There are a number of rigging adjustments for the horizontal stabilizer. These include the two bolts located inside the aft fuselage that set the angle of incidence, the threaded adjustments on the stabilizer struts, and the flying wires.

Start by checking that the angle of incidence is set as per the plans. It can be adjusted by adding or removing washers from the bolts at the leading edge inside the aft fuselage. The position called for in the plans is likely to be best for the full CG range during initial flight testing.

It can be adjusted further during flight testing to be set for the cruise CG most often flown. On mine the plans setting results in the elevator/horizontal stabilizer/pitch trim tab being all aligned at approximately 15" CG which is my most frequent configuration. When loaded further aft I accept a small amount of down elevator trim.

Next, level the main wings before attempting to laterally rig the stabilizer. I used a ladder with cushioning on it under one wing to raise it until both wingtips were level. This removes any difference caused by tire pressure or uneven fuel distribution etc. Check the fuselage is level in several places using a level inside the fuselage. Remember that the wings have a 1° dihedral.

I initially set the leading edges to ensure they were level and aligned with the main wings (but no dihedral) by adjusting the lower struts.

Each time I double checked by sighting from the front of the aircraft against the main wings. 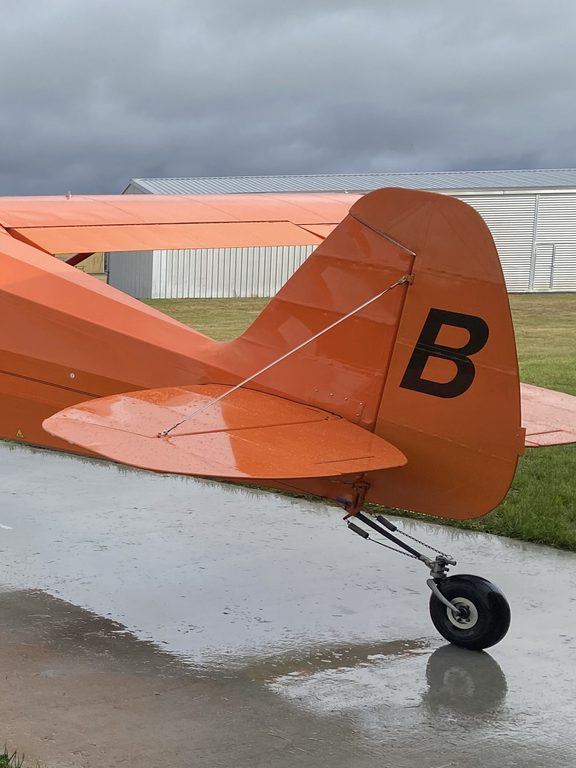 To ensure the elevator has a full range of motion with minimal friction.

To set the control stick in the desired fore/aft position.

Start by clamping the elevators in a neutral position in line with the horizontal stabilizer.

Next, adjust the turnbuckles to set the forward elevator bellcrank (under the front seats) in a vertical perpendicular position.

To adjust the pitch trim range to match the individual aircraft CG range.

To set the manufacturer specified tension on the pitch trim cables.

Set the pitch trim tabs in line with the elevators. Set the trim cable length so that the chain on the cockpit trim wheel sits approximately at its mid-point.

Using the turnbuckles, set the cable tension to the manufacturer recommended tension. I set mine to 60lbs.

After conducting flights at both forward CG and aft CG it may be desirable to adjust the trim travel to match the CG. In my case I had plenty of nose down trim, but not enough nose up trim at slow approach speeds. This is adjusted using the rod end adjustment on the aft trim tab push-rod (under the elevator).

In the event that there is insufficient adjustment, it is possible to make a small adjustment to the bend in the push-rod. This is a very coarse adjustment - a small change yields a big result so do it in small increments. I used a pipe bender to very carefully increase the bend by a few degrees. This has the effect of shortening the pitch trim push-rod, and moves the trim tab down (nose up).

To ensure the flaps retract fully against the stops.

To ensure the flaps deploy in alignment with each other.

Start by ensuring that the flap cables are loose and the flap handle in the down position. This allows the flaps to go to their fully retracted position against the stops inside the wings. Earlier kits included a curved rigging board - place this on top of the wing (gently) and look at whether the flap position conforms to the curve. If you don't have a rigging board, set the aileron trailing edge tips (initially) to match the wing tips, and the adjust the flaps to match. (Later we will be reflexing the ailerons). Adjust the rod end at the flap center hinge in or out as required to get the flap conforming to the wing profile. Once this is done, repeat for the opposite side.

The flaps should now sit in the correct retracted position against the stops. Under air load, they will remain in this position. If they are being held in the retracted position by cable tension (instead of the stops), when under air load they will retract further. However they may do this unevenly due to the Y shape of the flap cables which can introduce a see-saw effect.

Next, ensure that the flap handle is in the down (retracted) position, and tension both cable turnbuckles (just aft of the baggage compartment) until the flap cable is just starting to tighten. When doing this, ensure that they are both set to the same tension/length with the center main cable remaining in the center. If one of the individual upper flap cables is slightly tighter than the other, when flap is selected it will pull the main cable off center and result in an uneven flap deployment.

Then using the flap handle, select F3 or F4. Standing under one wing, sight along one of the flaps, through the rear windows and along the other flap. The object now is to see if the flaps are aligned with each other as they deploy. Make small adjustments to the turnbuckles until they are aligned. Now retract the flaps again and check that they still retract fully against the stops. Repeat these two steps until the flaps deploy in alignment, and retract fully to their stops.

Incidentally, the individual flap alignment in the retracted position can have a similar effect as the ailerons. This can cause a rolling tendency if not set correctly.

To ensure the ailerons have the correct throw relative to each other.

Start by setting the control stick vertical and clamping it in place.

Next, adjust the cable turnbuckles inside the wings to set the bellcranks to 90°. Then tension the cables to the correct tensions.

Finally, adjust the individual aileron rod ends to set the reflex so each aileron is reflexed 3/8 inch above the wing tip/flap trailing edge. If using the wing tips as a reference, check that the fiberglass wing tips are in alignment with the rest of the trailing edge as there can be some variation.

To set the rudder pedals and brakes to the desired ergonomic position.

To adjust the rudder to match the pedal neutral position.

To set the rudder to correctly match the propeller P-factor to give "feet off" coordinated flight (ball centered) at normal cruise speed.

Center the rudder against the vertical stabilizer and clamp it in this position.

Next, all rudder pedals can be tilted fore/aft to ergonomically suit the seated position using the AN3 bolts on the outside of the pedals (where they attach to the cables) and moving them into a different hole.

The brake pedal position can be adjusted for ergonomic fit by adjusting the clevis ends at the top of each brake cylinder.

Finally, it is important that the rudder is set to require minimal input at cruise speed. The vertical stabilizer is already off-set (as per the plans) to approximately balance propeller P-factor, so this just requires fine-tuning to match the power output/cruise speed of the aircraft.

I fitted a small trim tab on my rudder and made minor adjustments over a series of flights.

This resulted in a "feet-off" ball centered trim speed of 115kts IAS, which is my normal cruise speed when LOP. At higher speeds a small amount of left rudder is required, and during the climb or at speeds below 115kts some right rudder is required.

Incidentally, if the aircraft is being flown in balance (all else being equal) then the engine will burn equal fuel quantities from the left and right fuel tanks with the fuel selector in the BOTH position.

To set the gear shock strut rod ends to the same length.

The easiest way to check this is to roll the aircraft wheels onto greased plates then measure the distance between them. Alternatively, roll the aircraft backwards and forwards a few times, however this method is less accurate and is affected by the amount of toe in/out of the wheels.

I hoisted the front of the aircraft off the ground (one side at a time) to do this. As a safety consideration, I found that using a block and tackle suspended from a structural beam was more reliable than using a hydraulic hoist because the hydraulic hoist tended to lose pressure over time.

The first time I disconnected the shock struts it was a difficult job, but I can do it relatively easily by myself now.

It's a good idea to check that the rod ends are both the same length at this time.

Incidentally, I found it difficult to balance the aircraft to "wings level" on the ground because it is depends on so many factors. The individual tire pressures and fuel tank weights largely affect whether the aircraft sits evenly. In addition, something to be aware of when parked on even a very slight slope is that with the fuel selector in the BOTH position, once a fuel imbalance starts, the heavier wing is pulled lower and this can magnify the lateral displacement of the wing by causing even more fuel to flow across.

On my aircraft I simply set the rod ends to the same length.

This should provide a good setup prior to the first flight. During flight testing, rigging can be further adjusted.

Kevin Deutscher wrote some excellent articles on rigging during flight testing HERE (subscription may be required).